Christopher Davidsen of Speilsalen and Britannia Hotel invited Trondheim guests and the very best of Nordic chefs to a historic and unforgettable evening with Nordic Taste Dinner.

Ten top Nordic chefs, with a total of eleven Michelin stars, and eleven courses. A night to remember in glamourous and stylish Britannia Hotel, a five star hotel housing Michelin restaurant Speilsalen. For the first time in Britannia Hotel’s history the doors between Speilsalen (‘Mirror Hall’) and the large dining room of Palmehaven (‘Palm Garden’) were swung open.

Executive chef Christopher Davidsen gathered his Nordic colleagues for a seafood extravaganza, each course an expression of the respective Nordic chef’s star restaurant. Over 200 guests enjoyed tasting the creations of the top chefs of Sweden, Finland, Iceland and Norway. When did anyone ever before savor the inspirations of so many Nordic top chefs at the same time? 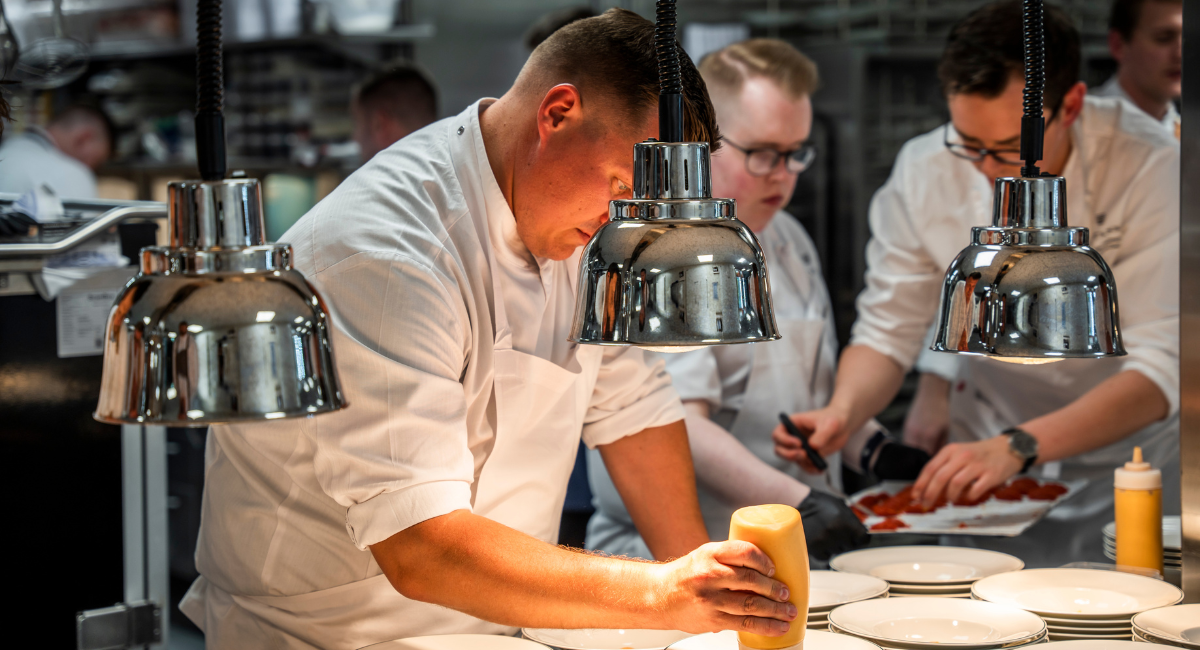 Trøndelag and its locally sourced ingredients

The reason Davidsen had gathered his colleagues here was to show his chef friends and Nordic Taste Dinner guests the impeccable quality of the locally sourced foods of the Trøndelag region. Also, because all of the very best food producers of the region are present here right at this time for Trøndelag Food Festival, one of Europe’s very leading food festivals.

And especially because of the seafood.

As Sven Erik Renaa, chef of two Michelin-starred Renaa in Stavanger explained; he knows a local guy named Roderick. He has a diving business where he goes diving for razor shells in the ocean near Fosen. ‘The places are secret and he won’t tell me,’ Renaa says. The razor shells are then shipped down to his Michelin restaurant in southern Norway. Because there ain’t razor shells quite like the ones you find in Trøndelag.

Renaa started off the eleven course Nordic Chef Taste Dinner with these exact razor shells, elegantly laid atop a bowl of crushed ice and decorated with fresh elder flowers. 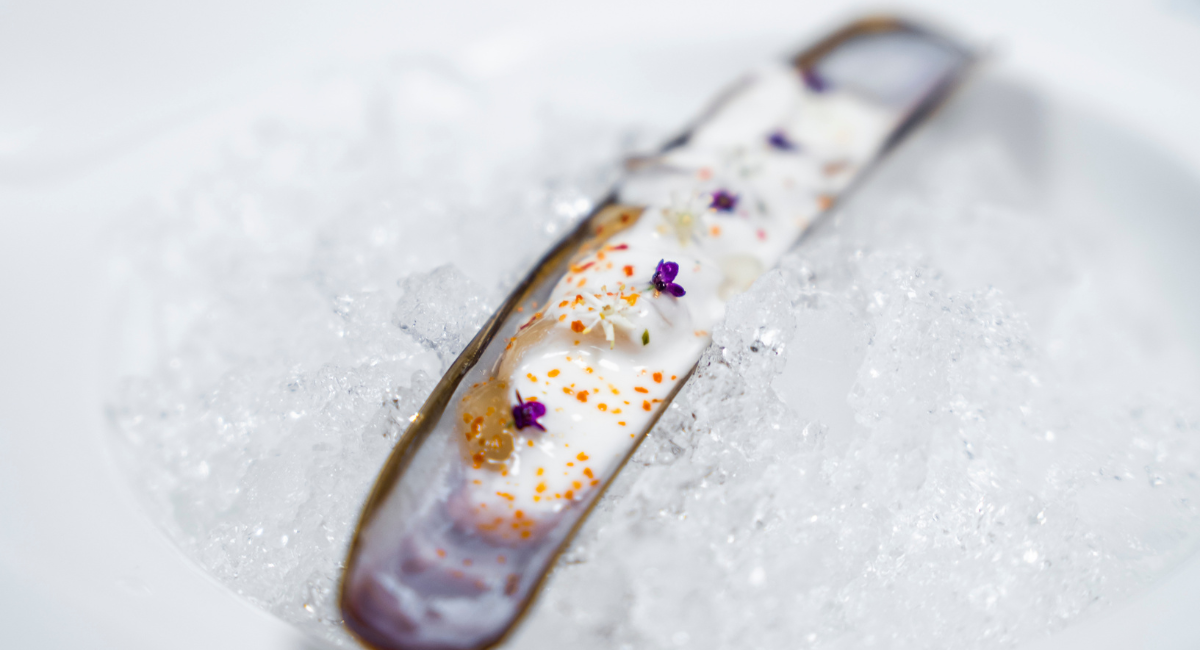 Christopher Davidsen of Speilsalen followed up with caviar, yeast and sour cream. It was in the shape of a small croissant, with the caviar decorated like pearls on top. 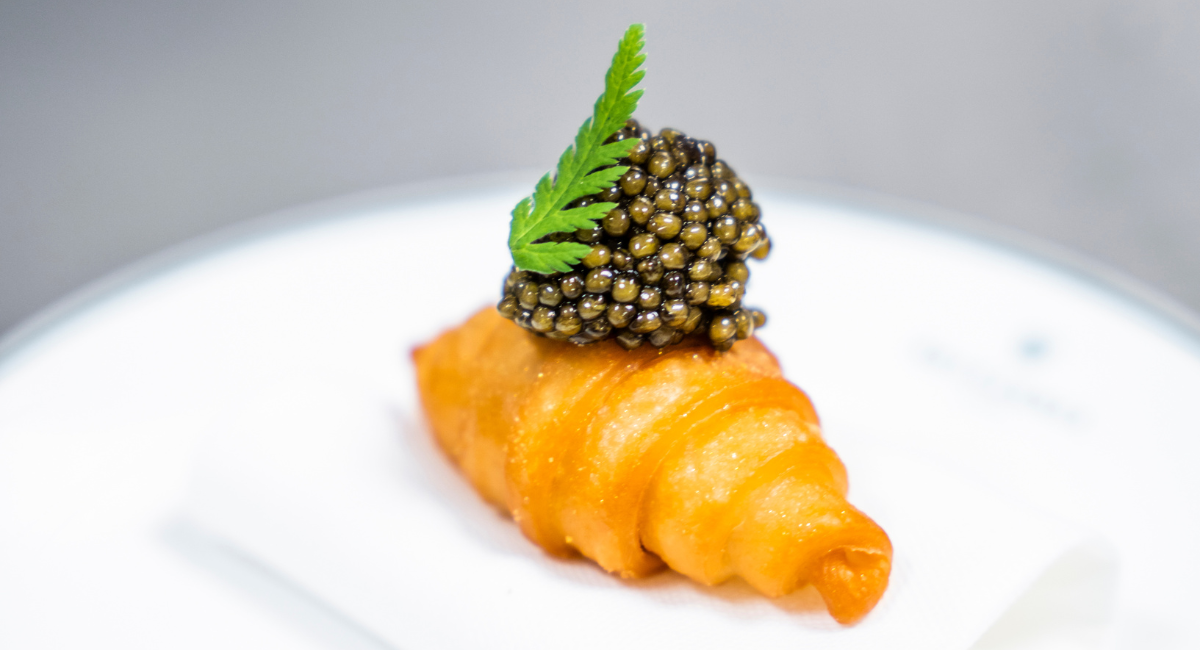 Mikael Svensson from Kontrast in Oslo placed raw shrimp in a glass bowl, surrounded by a rhubarb and shoyu broth. Plush, tart and salty. 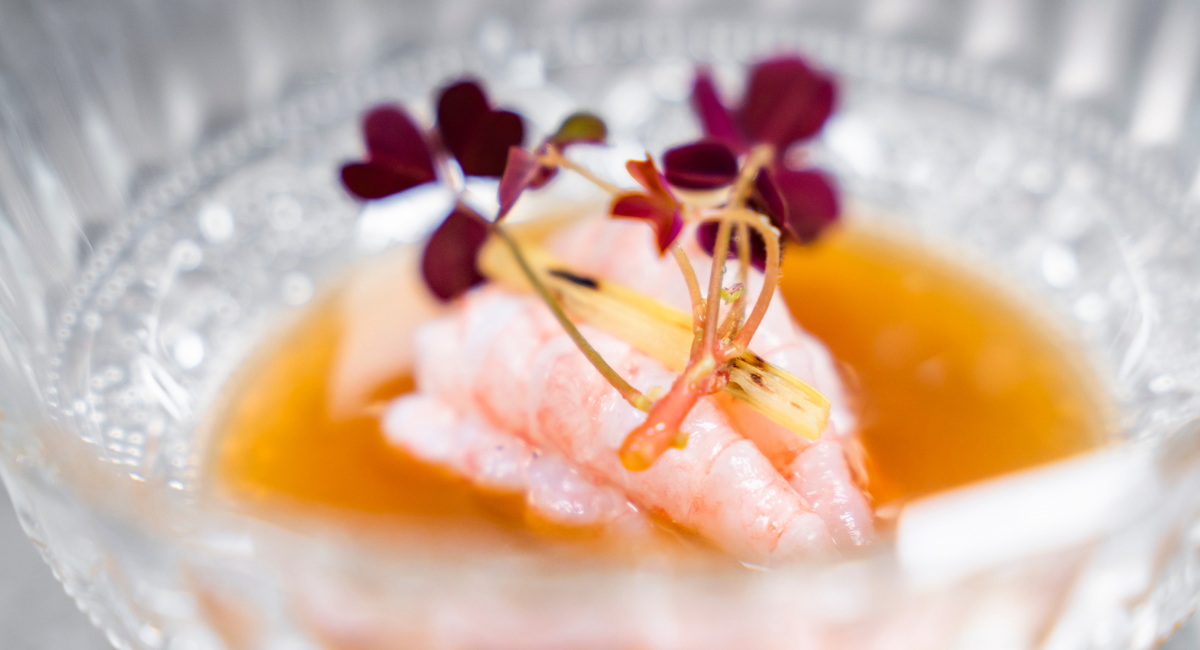 Ørjan Johannessen og Bekkjarvik Gjestegiveri in Austervoll on the west coast of Norway served a course of beef tartar and oysters, and plum sake. 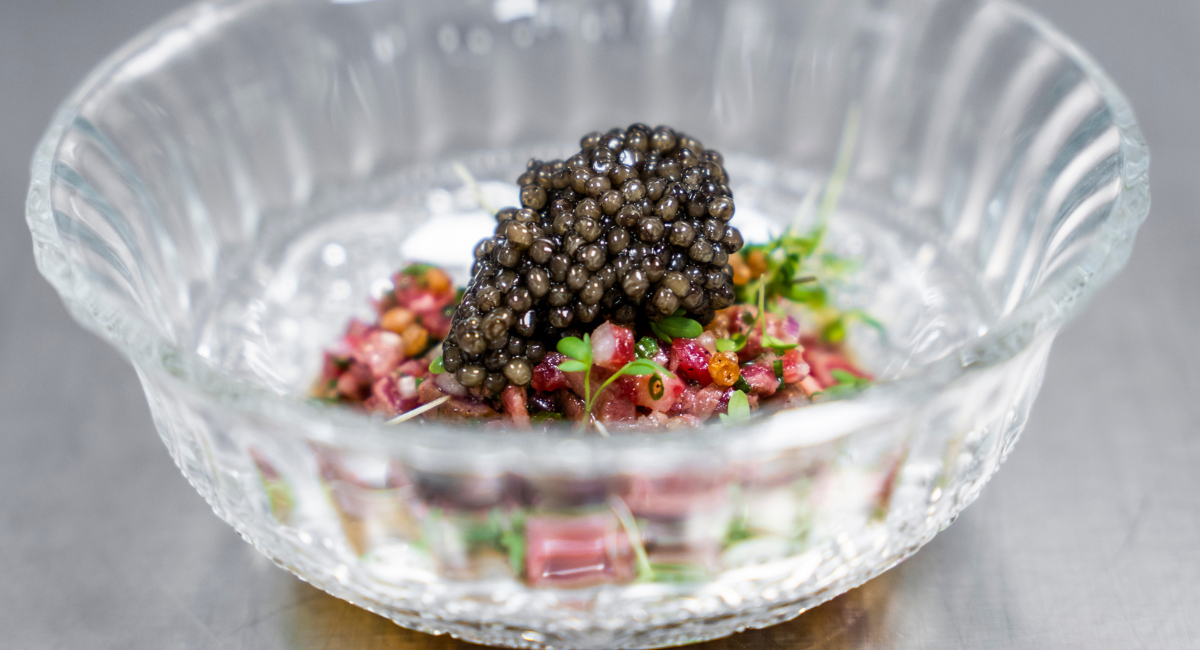 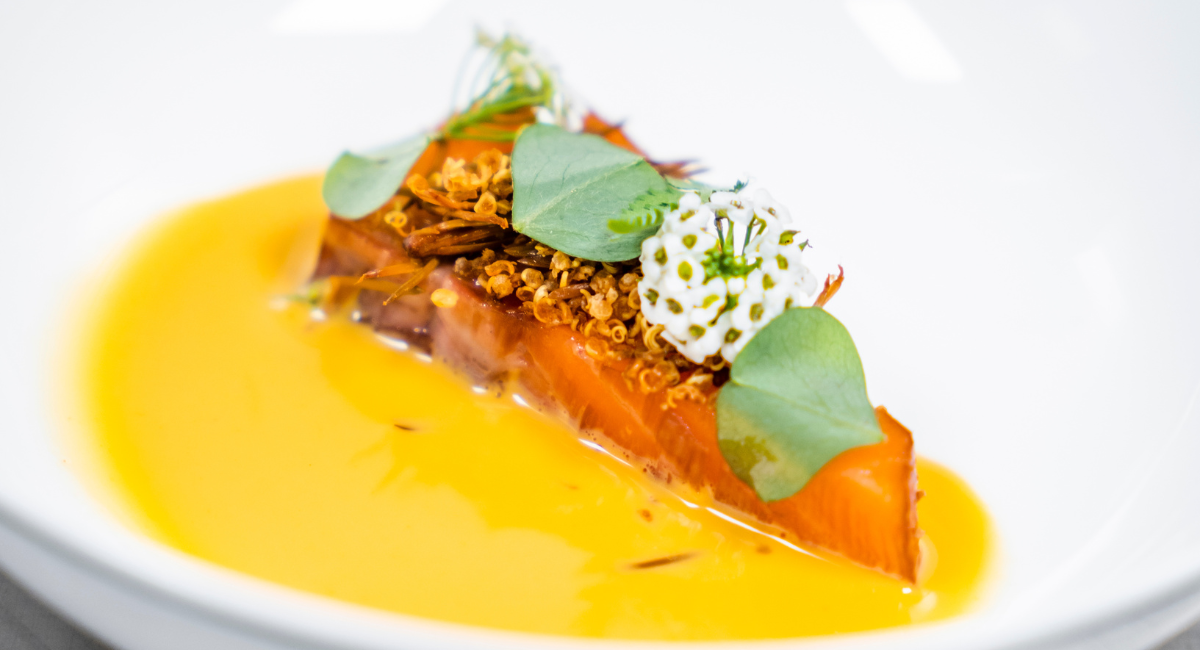 Langoustine was the star of the plate on Eero Vottonen’s plate, the Finnish chef of Palace in Helsinki served it with summer tomatoes and his perfectly fiery chili-based XO sauce. 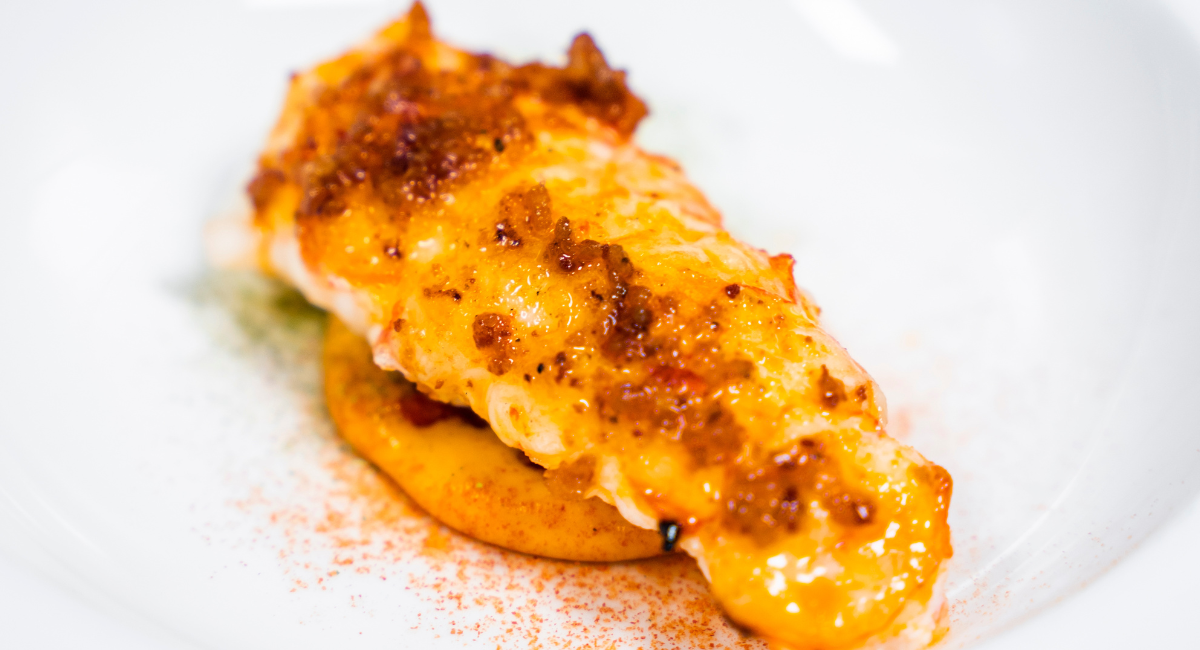 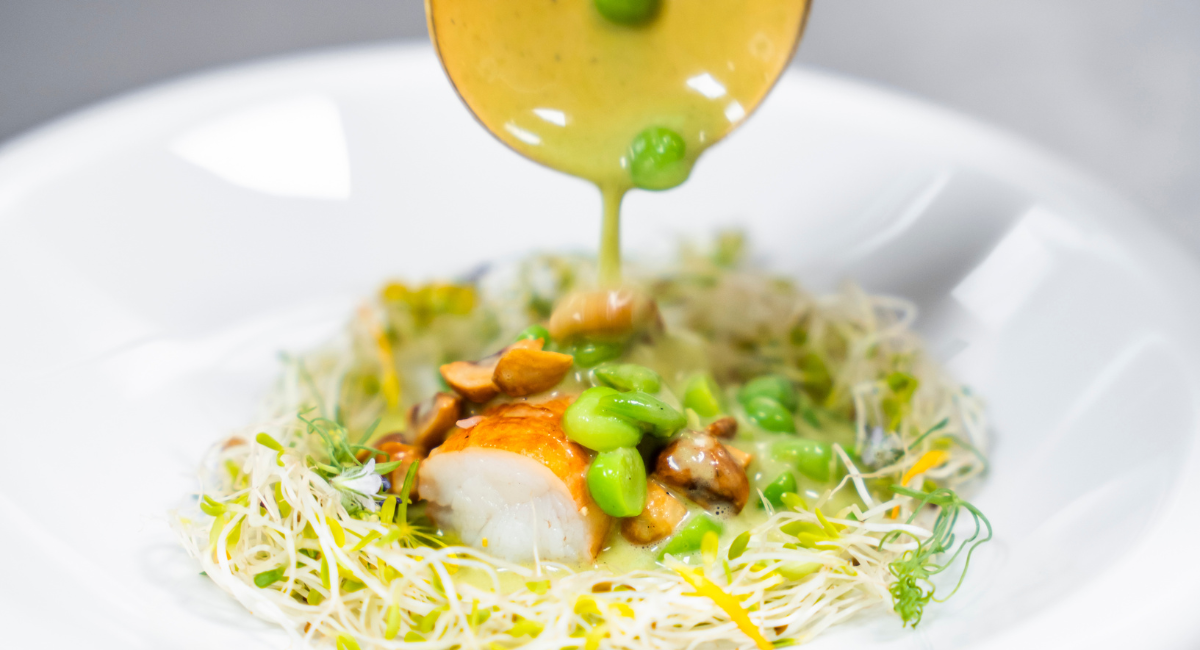 Jonas Lagerstrøm from Etoile in Stockholm served turbot slow grilled on low heat. It had a smoky flavor and notes of summer. 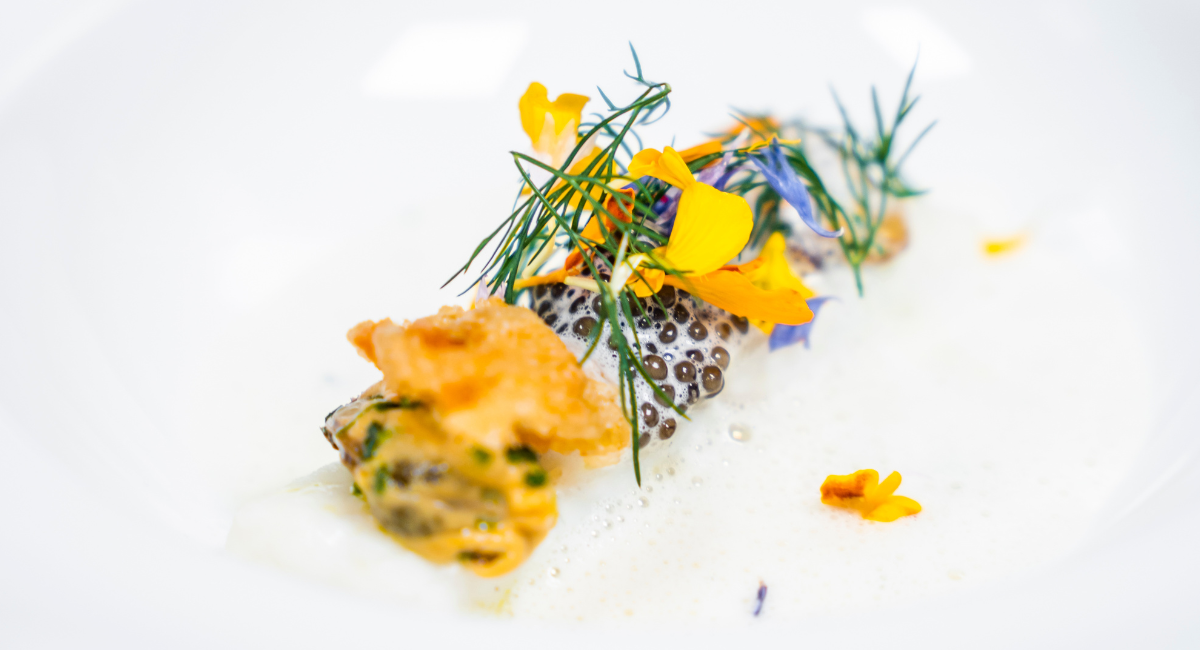 Tender halibut with a tartelette with local herbs, lemon scallop sauce, tarragon aioli and a sauce made from fish bone and crab shells made by Viktor Örn Andrésson of LUX Veitingar in Reykjavik, Iceland, completed the seafood tasting experience on a high note. 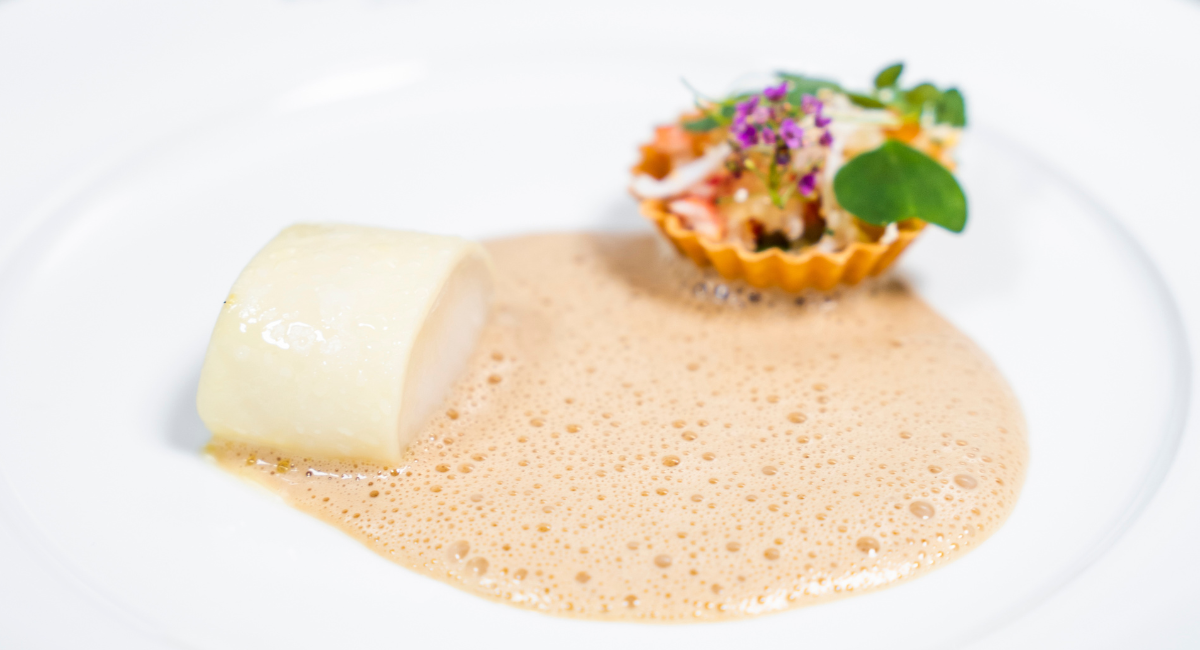 To round off the perfect dinner: dessert, by Christopher Davidsen. Diners got a raspberry creation with cream and ice cream, decorated with such beauty that it was hard to dig the fork into. 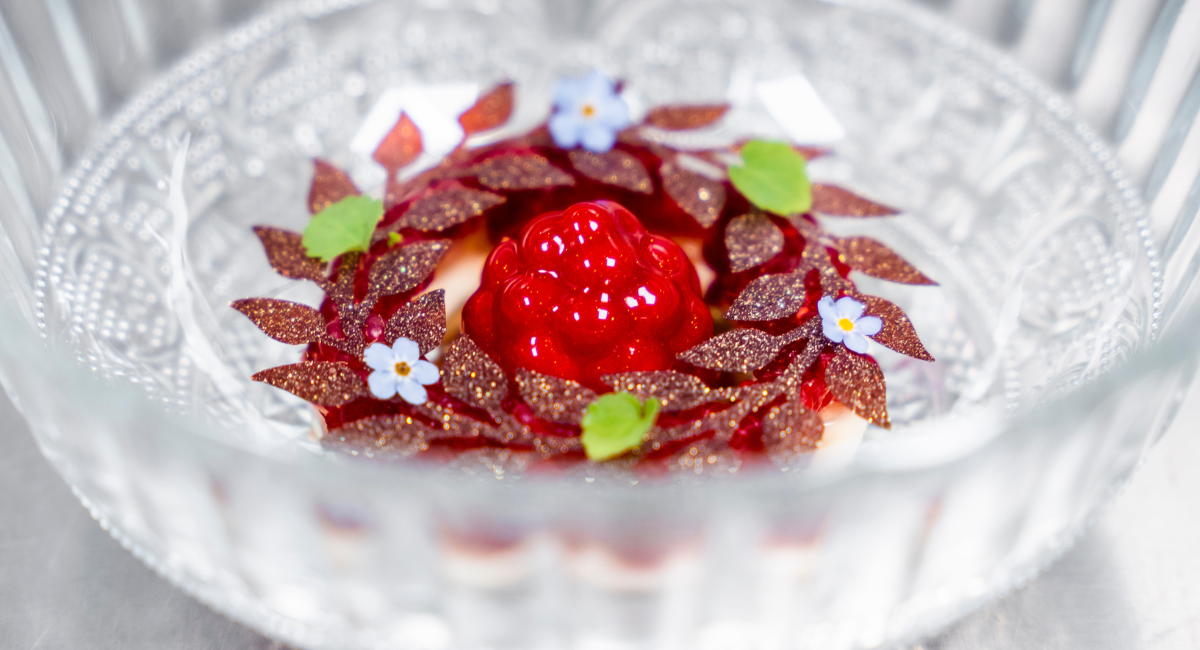 The following day the chefs took time to explore the abundance and variety of Trøndelag Food Festival. 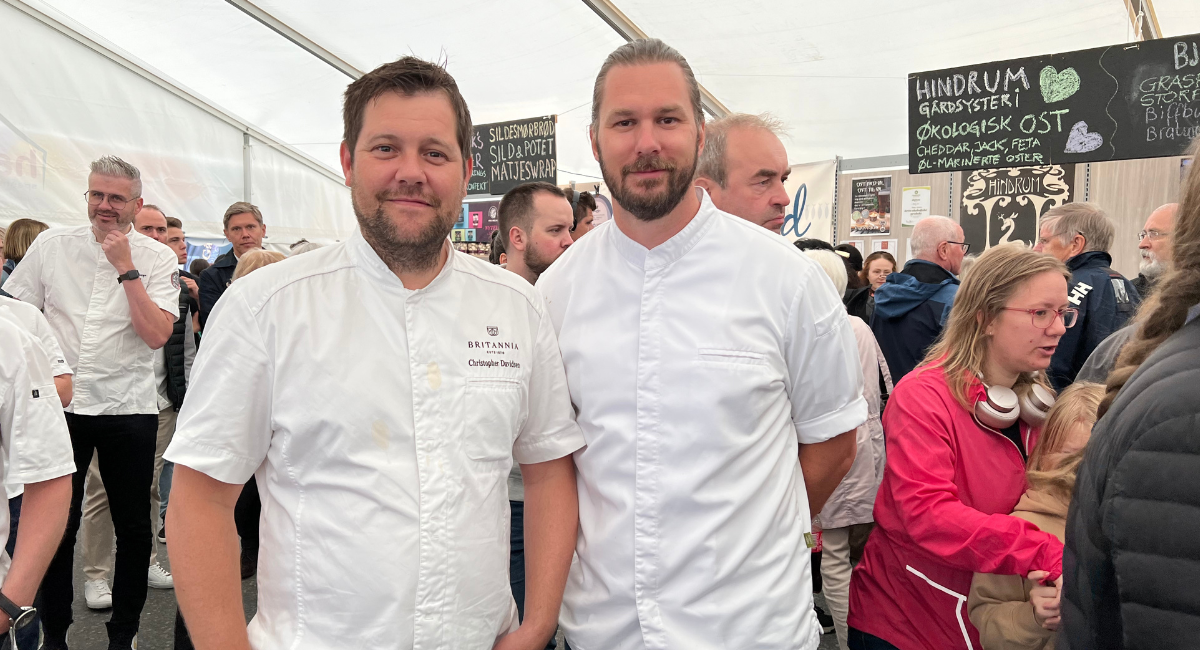 They got to taste things like award-winning cheeses from the region’s cheesemakers, sauna-smoked leg of lamb based on ancient Viking traditions, reindeer heart and tongue from a South Sami reindeer herding family, whey-fermented trout called ‘grævfisk’, only produced in a tiny corner of Trøndelag all to the east bordering Sweden. 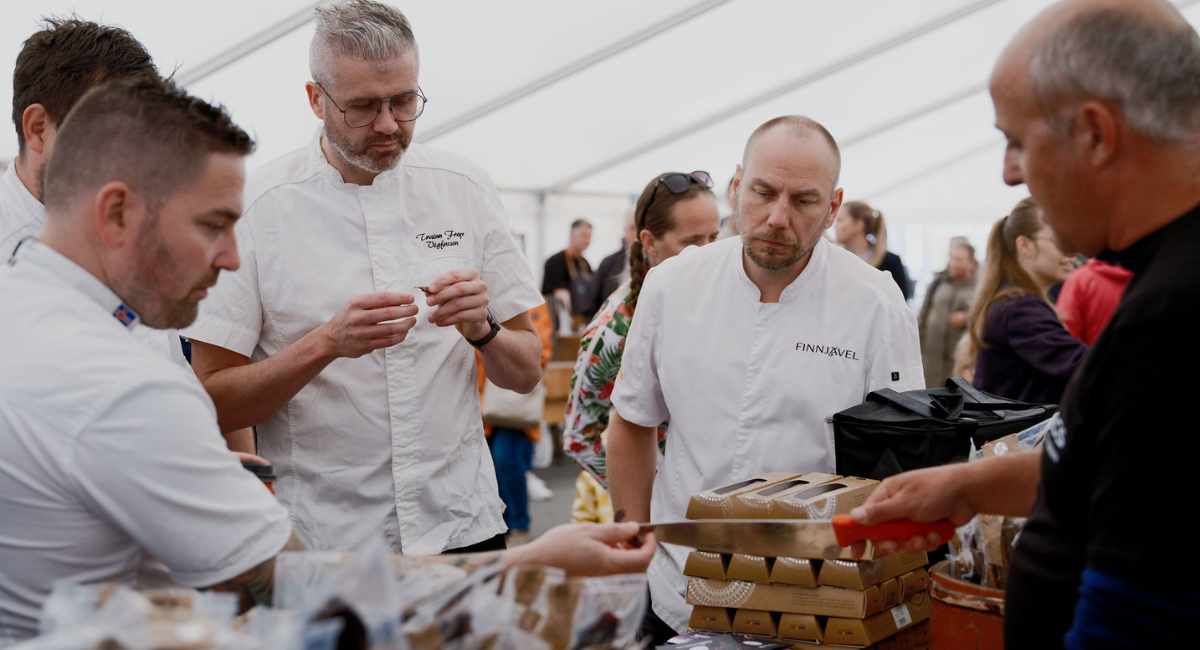 And the festival has more to offer. It has 170 booths with foods and specialty products from the entire region of Trøndelag, and chef Davidsen of Speilsalen explained how he uses products from these makers when designing his tasting menu at Speilsalen. 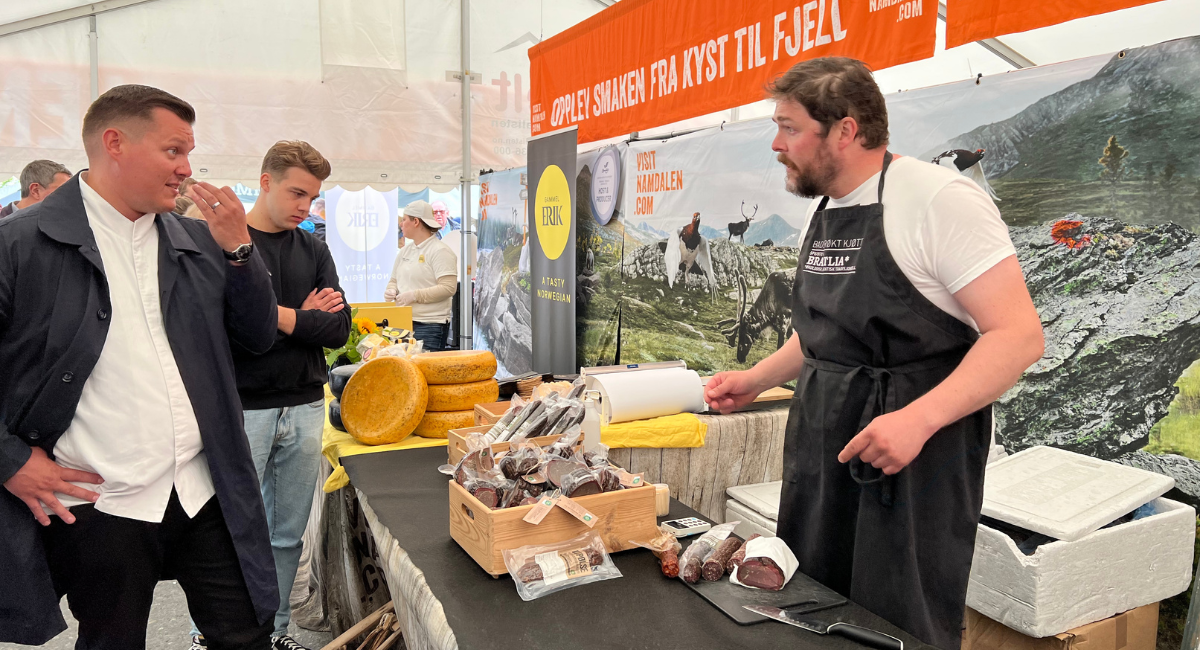 Nordic Chef Symposium is a success, and rumor has it that a repeat is very likely. We encourage you to take the trip to Trøndelag, if you love great food, you'll have to. 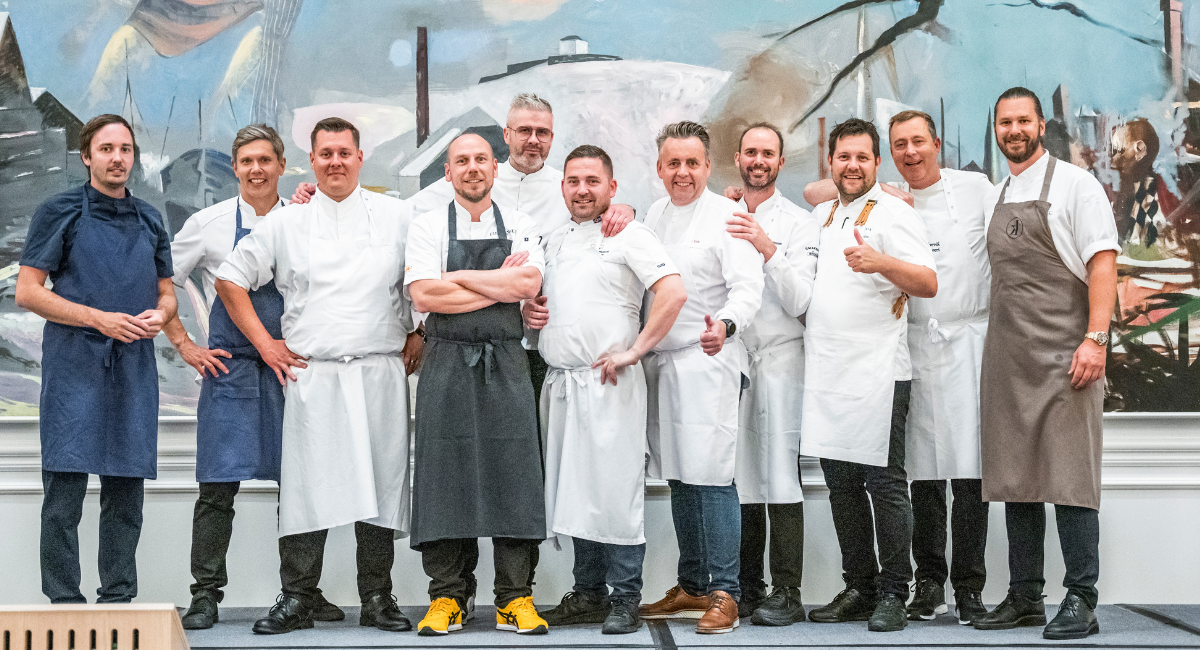